The next installment of my Technique Improvement Series focuses on four mallet technique. My how the world has changed in the last 40 some odd years. While most players used four mallet techniques 40 years ago, the demands on that technique were not nearly what they are now. 99% of college applicants are playing four mallet solos at their college auditions now. And hard ones at that. The solo repertoire has exploded and the ensemble repertoire has followed. Almost all of the contemporary repertoire I see with the St Louis Symphony (with mallet parts) requires the use of four mallet technique. This is hardly a newsflash but I don’t think this relatively new demand always makes it into our normal practice routine. Sure there are marimba jocks who have more technique than you will ever need for most situations. Sure the vast majority of ensemble parts don’t require advanced technique. However, there is repertoire out there that requires advanced four mallet technique outside the solo world and the world is still turning and composers are continuing to ask more and more of us.

In 2011 Opera Theater St Louis premiered a reduction of John Adam’s opera The Death of Klinghoffer. The opera had been written years earlier but John wanted to do a reduction so companies with smaller pit sizes could play it. The original requires 3 synthesizer players and 1 MalletKat player. The reduction was for 1 synthesizer player and 1 MalletKat player. Guess where a lot of those lost synthesizer notes went? That’s right, into the MalletKat part; and as we all know, what can be done with 10 fingers can’t always be done with 4 mallets. If I didn’t have fairly advanced four mallet skills there is no way this opera could have been performed. It is easily in my top 3 hardest ensemble parts I have ever played. Thankfully they have changed the part significantly since I saw it, but it is far from easy. What is scary is this train is just getting started and we should get used to it. With this small soapbox moment out of the way, let’s look at some ways to improve and maintain our four mallet playing. 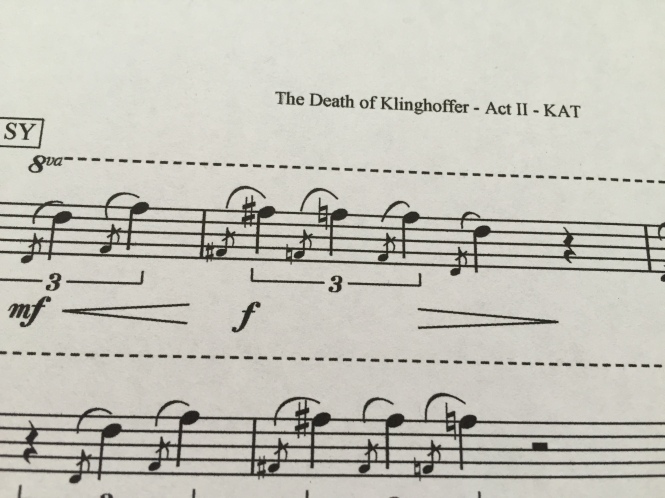 We are lucky that in the late 70’s Leigh Howard Stevens wrote the book for four mallet technique in Method of Movement for Marimba. Yes it is for marimba (not vibes or xylophone) and yes it focuses on his Steven’s grip but the resources inside apply to any grip and any instrument. Another book I like that is written with a younger audience in mind is Simply Four by Gifford Howarth. This is a nice introduction for a beginner before digesting Method of Movement. 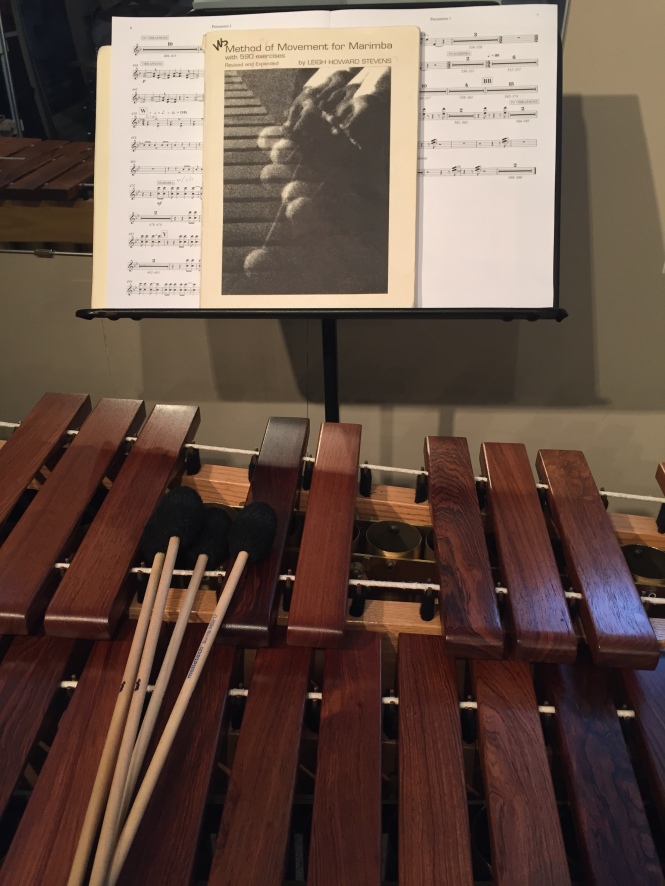 I approach four mallets very similarly to how I have approached snare drum and two mallets thus far. In a very scientific way that breaks down the technical demands of the instrument. Leigh Stevens does this in Method of Movement and Rob Knopper talk about his approach in his blog post about technical short comings. Because holding four mallets requires the use of lots of very small muscles I do not start very fast. I warm up very slowly and allow those muscles to literally “wake up” before approaching anything technically demanding. With this in mind, the first thing I do when I walk up to the instrument is play “8 on a hand” but with double verticals. I will usually stay with a fifth but will walk my way up the instrument chromatically. This is obviously very boring but the point here is to literally warm up.

Next I will work on some single independent strokes in some variation similar to exercises 1-5 in Method of Movement. Again, this is to wake the muscles up, not necessary extend our ability. Then I will do some slow scales using only one mallet (first 1, then 2, etc…) 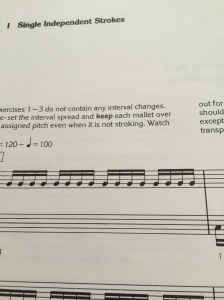 After I have done this very basic warm up I move to double laterals. Double laterals are one of the most common technical demands on the instrument. To start I will do arpeggios with the sticking below, continuing through all 12 keys. Some of the transitions are slightly awkward but I am not playing this for speed, just to continue warming up. Then I will work on exercises similar to #478-485 out of Method of Movement. This helps me work on both the inside and outside double laterals. You can continue through this section for more advanced exercises but this is certainly enough for a warm up.

The next area I focus on is my octaves. Large intervals are difficult and I find some concentrated time initially really solidifies the proper finger positions. Exercise # 271 is my go to for developing control with octaves. Very simple but very useful. 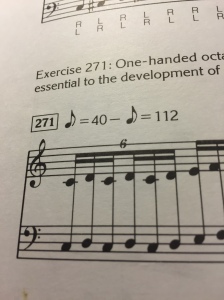 For a basic warm up this routine will get the fingers and hands warm. However, to continue to develop our technique we need to go a bit further. The next big task I tackle is interval changes. It’s great to be able to play fifths and octaves, but can you go from one position to the other? To play the modern repertoire you better be able to! The exercises on page 55 are great to begin to work on this. Interval changes are tricky so be sure to have a very slow tempo at first and start with the hands separate. I believe this is the hardest technical aspect of playing four mallets. Manipulating the mallets in this way is very tricky. Lots of time working on interval changes will pay off in the end!

Interval changes and shifting are somewhat related as they tend to both happen at the same time. If I find myself missing a note repeatedly in practice, most of the time it is because I am not shifting properly. Double verticals are a great way to practice this because it isolates the shift and doesn’t complicate it any more than it is. I start with the bottom of page 56 and work my way through the chapter.

Obviously I am a fan of the Method of Movement since most of my routine revolves around it. I do not spend a lot of time working on single independent strokes as the rest of my technical work takes care of most of that ability. Leigh does suggest some daily routines in the back of the book for additional focused technique work. In my experience, on marimba, vibes, snare drum or any other instrument this sort of technically focused work is great but can only take you so far. Applying it to the repertoire is where the next step is taken. Finding a passage that is technically demanding and slowly working through it is the ultimate means of improvement.

As always please leave comments below on your own routines or any questions you might have. Stay tuned for the next installment of this series focusing on cymbal playing!

8 thoughts on “Technique Improvement and Maintenance: My Warm Up Routines – Four Mallets”

The Modern Concert Snare Drum Roll by William James is available for purchase from Meredith Music.