Well, PASIC 2014 is in the books and I am exhausted, motivated, energized, and overwhelmed all at the same time. PASIC is an experience like no other and I have yet to attend a convention where I didn’t learn a massive amount. This year I was rather graciously given the week off from the Saint Louis Symphony and could attend the entire event. Here is a recap of my weekend.

Thursday
Thursday started early as we had our annual Symphonic Committee Meeting at 8 am… While it was good to see old friends, it was an early start to say the least. We discussed how this year’s PASIC events were looking and looked ahead to next year. We had a great discussion about what our panel discussion should be and I think y’all will like it. Look for it next year in San Antonio! Then I was off to set up my class and get warmed up. I had spent a couple months preparing my class and had presented it a few times before PASIC, but was still nervous and anxious that my points would come across. Despite being one of the first clinics of the convention and most people not arrived yet I was thrilled with the turn out. Neil Grover had to arrive late and he said he had trouble getting through the door! I felt relatively good about the class and feel like my points came across about as well as they could. Thank you those who attended!!! It is a HUGE honor to present at PASIC! 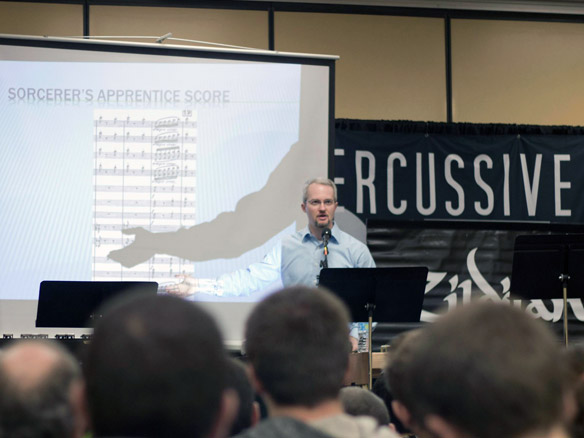 After the class I headed to the Meredith Music booth to answer questions and meet those who had attended my class. I met several students and had some great conversations. The highlight of the entire week though was watching someone thumb through my book and when I went to introduce myself, he turned around, and it was Arnie Lang… I was stunned. We started talking and he could not have been a kinder man. Eventually, he asked me to sign a copy of my book for him. We had a great conversation about the book and snare drum playing in general. With the possible exception of receiving the first copy in the mail this was definitely the highlight of my 3 year process of writing the book. To say I was walking on air would be an understatement.

Once I came down from my high of meeting Arnie I went to an old friend’s clinic, Ed Choi. He presented a beautifully organized clinic on orchestral solutions. We encounter lots of tricky problems in the orchestra and Ed had highlighted many of them and ways to solve them. The impressive part was how he sighted the sources and how he had clearly been influenced by American orchestras, European orchestras, as well as Eastern orchestras. I was very impressed. Some of my favorite solutions were using two whips mounted on a table for Mahler, putting the tambourine on a snare drum with the snares on for Pines, using a quiro for the ratchet in Pines as well has multiple BD/cymbal attachment solutions.

After Ed’s class I headed to my room and checked in before dinner. Dinner was with some very close friends: Keith Aleo, John Tafoya, Ed Choi, Rob Knopper, Anders Astrand and his wife. This is the coolest part of PASIC, the HANG! We did a fabulous job of that as well as eating too much and laughing too much. Despite the informal vibe I couldn’t help but be inspired by my company.

Friday
I spent the morning checking out the floor of the exhibit hall before finally splitting time between Ian Wright and Kris Keeton’s classes. It was great to see Ian’s great touch on the drums with such a unique perspective after years in Royal Liverpool. While I was late to Kris’ class I caught enough to be seriously impressed. He is clearly a good teacher and was extremely organized. He discussed techniques and strategies to improve memorization. It was a nice balance between philosophical and practical advice. I have always liked Kris and it was great to see him do so well in his class. I definitely picked up a few things to work on in my own playing.

After lunch with some family who lives in Indy I headed to She-e’s class. I’ve always been impressed with She-e’s playing and really value my time studying with her. This class at PASIC was vintage She-e for anyone who knows her. The energy and passion was contagious and the audience responded big time. She has a touch on the instrument I wish I had!

Next was Phil O’Banion’s class on accessories. He had some great students (including one of my own) play and he did a great job of coaching them through the repertoire. He also had them do a lot of section playing which was a great addition to the class. We certainly should have students do more of that at PASIC.

I then ran to catch So Percussion’s concert. I’ve known these guys for a few years now and they never disappoint. They present their music in such a personal way that it is impossible not to enjoy. They are clearly very comfortable with their voice and presentation style and it comes across to the listener. We have GOT to get them to St Louis to do David Lang’s new concerto he wrote for them!

Finally, Rob Knopper closed out the day with a mallet lab. He had four very talented students play and he dropped some great bombs of knowledge for all of them. You could hear very quick improvement on what was already good! His use of technology in the class was also very effective, something I think future presenters should use when teaching in that environment.

Friday night’s dinner was fantastic as well as I got to catch up with Malletech buddies Scott Herring, Blake Tyson and my old teacher and mentor Mike Burritt. I don’t remember much of the walk to dinner as it felt like it was 10 below but despite this Blake decided to order an absurd amount of ice cream…

Saturday
I spent most of Saturday walking the Exhibit Floor checking out the new gear. I only bought a few new pairs of mallets but got to check out lots of new products including some of the new cymbals at Zildjian they are working on. I’m always impressed with their dedication to keep innovating and coming up with new ideas. I stopped by the Meredith Music booth and found out they only had a few copies of my book left! It looked like they were going to sell out by the end of the day. Such great news and thanks to any of you who have bought a copy!

After a long day on my feet I was happy to sit down for the Third Coast Percussion Group’s afternoon feature concert. I was in school with most of them at Northwestern but I have never been in the right city at the right time to hear them play. Saturday’s concert was seriously impressive. I knew they could all play but as an ensemble they are really remarkable. They clearly love playing together and have their own voice as a group. I’m not overstating that this was the best performance of the week. They owned that concert and had the audience’s attention the entire time. I had to drive back after the concert and while I was sad to leave it was the perfect way to end the week. I could not have been more proud and inspired by their performance.

One thought on “PASIC Wrap Up”

The Modern Concert Snare Drum Roll by William James is available for purchase from Meredith Music.

Videos for each chapter in The Modern Concert Snare Drum Roll.

Setting Up to the Drum

The Basic Principles of the Modern Concert Snare Drum Roll

Implementing All Three Principles Into One Stroke

Building a Sustained Roll and Developing the Sound

The Release of the Roll

Alternating Between Single Strokes and a Roll